Mini madness descends on the Clash Universe! In this game of choices, duel and Rumble in a fun, strategy-packed board game.

Collect, Summon and Upgrade your army of Minis in this exciting real-time auto battler. Predict your opponent’s moves and then assemble your winning strategy and formation. Watch your Minis come to life and clash to be the last one standing!

Lead your adorable army with Heroes including Barbarian King, Shield Maiden, Archer Queen, and more. Ignite the board with wizards, pierce with magic archers, or activate heavyweights like Pekka. Change the tide of battle by swapping and upgrading your Minis in between rounds. Play 1v1 or Rumble mode against 7 other players. Play casually for fun or in ranked matches to increase your League standing.

Clash Mini is easy to learn but challenging to master. Get ready for your Minis to throw down the biggest Rumble!

Fast, Exciting 3D Battles
• Each game is action-packed – battles are under 5 minutes
• Watch the Minis show off their special moves from different camera angles
• Progress through the Leagues and break into the global top 1000 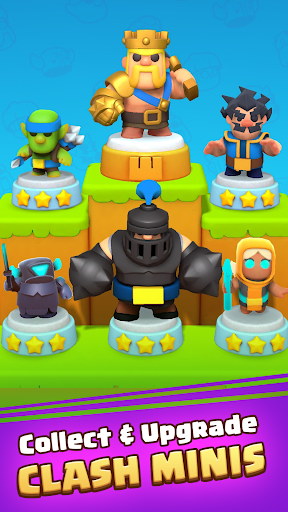