Snakes and Ladders, known originally as Moksha Patam, is an ancient Indian board game regarded today as a worldwide classic. Snakes and Ladders originated in India as part of a family of dice board games. It is played between two or more players on a gameboard having numbered, gridded squares. A number of “ladders” and “snakes” are pictured on the board, each connecting two specific board squares. The object of the game is to navigate one’s game piece, according to die rolls, from the start bottom square to the finish (top square), helped or hindered by ladders and snakes, respectively.

Game play
Each player starts with a token on the starting square (usually the “1” grid square in the bottom left corner, or simply, off the board next to the “1” grid square). Players take turns rolling a single die to move their token by the number of squares indicated by the die roll. Tokens follow a fixed route marked on the game board which usually follows a boustrophedon (ox-plow) track from the bottom to the top of the playing area, passing once through every square. If, on completion of a move, a player’s token lands on the lower-numbered end of a “ladder”, the player moves the token up to the ladder’s higher-numbered square. If the player lands on the higher-numbered square of a “snake” (or chute), the token must be moved down to the snake’s lower-numbered square.

If a player rolls a 6, the player may, after moving, immediately take another turn; otherwise play passes to the next player in turn. The player who is first to bring their token to the last square of the track is the winner.
Classic ludo Snake & ludo is a classic board game . This game is played between 1-4 players. 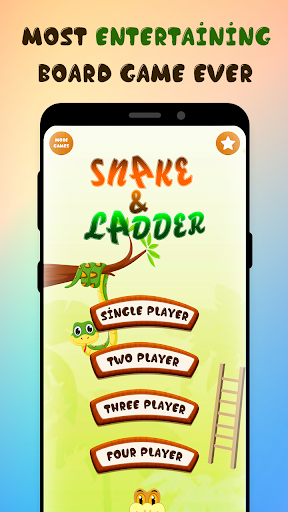